Effie Kammer (performer, Great Uncle) was born in Switzerland, raised in NYC, and moved to Philadelphia almost ten years ago. She is currently pursuing an MA in Theater at Villanova University. Previously, she studied with Esther Brandice at Actor’s Advent and at The Actor’s Center. Her recent roles in include Titania in A Midsummer Nights Dream, Feste in Twelfth Night at the Pennsylvania Academy of the Fine Arts, Caroline in Detroit ’67 at The Stagecrafters Theater, and Hamlet in Hamlet at the Society Hill Playhouse. Her one-woman show, The Box, in collaboration with Bob Sloan, premiered at the New York International Fringe Festival.

Peter Kochanek (performer, HURT) is a recent addition to the Philadelphia theater community, having moved from Western Massachusetts in the Fall of 2019.  Some previous credits include Judas in Godspell (CAST Regional Tour), Renfield in Dracula (Regent Theater), and Cord Elam in Oklahoma! (Regent Theater). While he enjoys performing scripted work, Peter’s main artistic focus is improvised comedy. He spent three years studying improvisation under Derek Leonidoff (iO West, Groundlings) and has taken courses at The Upright Citizens Brigade in NYC and Philadelphia School of Improv. Feel free to follow him on Instagram @therealpeterkochanek for useless videos and an unreasonable amount of Star Wars memes!

Josh McIlvain (writer-director) is a Philadelphia-based playwright, director and producer. He is the artistic director of Automatic Arts (automaticartsco.com), which he founded with Deborah Crocker in 2008, and has been writing and directing for the company ever since, along with creating collaborations with other artists. He founded the Nice and Fresh presentation series of new works of theater and dance. In addition to the Nice and Fresh series, the company produces shows written and directed by Josh and collaborations with other artists. Additionally, he has had his plays (shorts, one acts, and full lengths) produced throughout the U.S. He lives in the Mount Airy neighborhood of Philadelphia with his wife Deborah Crocker and children Jasper and Ginger. 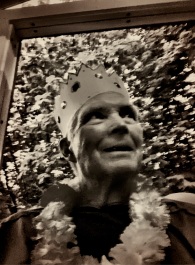 John M McIlvain (poet, BUZZ) first got the idea that writing poetry would suit him from Arthur Schwartz when he was in 4th grade. Since he retired from teaching English in 2004 his poems have been influenced by his experience translating 30 of Horace’s Odes which was like learning at the feet of a master. He currently lives in Georgetown, Maine where he is civically engaged and looks forward with his wife Betsy and looks forward to visits from his children and grandchildren. In addition to his poetry, he wrote a novel Worth Avenue and a memoir Graveled Ways. The accompanying photo was taken at his 79th birthday and alludes to upcoming adventures in Hawaii.

John Rosenberg (performer, HURT) runs Hella Fresh Theater in Kensington. He grew up in Los Angeles but moved to Philadelphia. He has also shown numerous one act plays in the Nice and Fresh series presented by Automatic Arts. He is so grateful for the support of his friends and his family. His new play Osceola runs February 8 to March 1 at the Papermill, 2825 Ormes St, Philadelphia, also part of Philly Theatre Week.

Megan Thibodeaux (performer: The Lodge and HURT) is an artist, designer, and songwriter based in Philadelphia. She is a member of the band Girl Poop, a femme collective that creates pussy pop rock using the forms of cabaret, burlesque, and clown. With Antigravity Performance Project Megan co-created, co-designed, and performed Dear Diary LOL at The New Ohio Theater (NYC), FringeArts, and the Philadelphia Fringe Festival (2015-2018). With this collective she also co-created and performed Nellie/Nellie at the Philadelphia Fringe Festival (2015).  Megan designed costumes for Fourth Quarter presented by the First Person Arts Festival (2018) and she makes couture clown costumes for her alter ego Roy, The Singing Bartender who is featured at the Werks Barehouse Cabaret Series. Her original performance/ writing/ design work has been showcased in New Orleans at The Hell Yes Fest and in Philly at AGITATED, Beth and Ralph’s Porn Stash, DTF: The Daryl and Timaree Fun Hour, Philly Sketchfest, and Revolution Shakespeare. Megan is a 2015 graduate of the Pig Iron School for Advanced Performance Training.