A GREAT LINE UP FOR THE HOLIDAY SEASON . . . 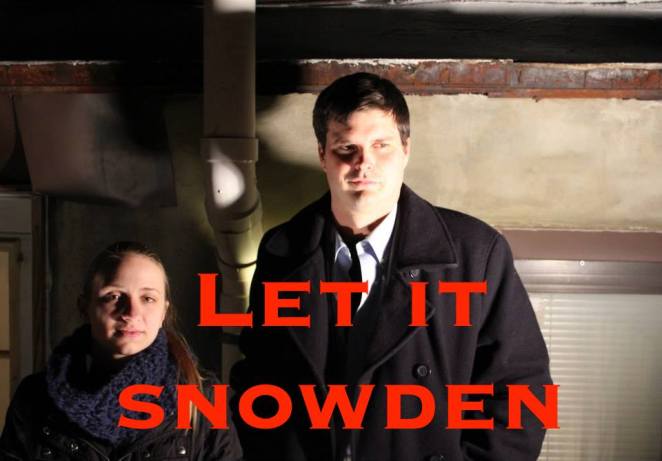 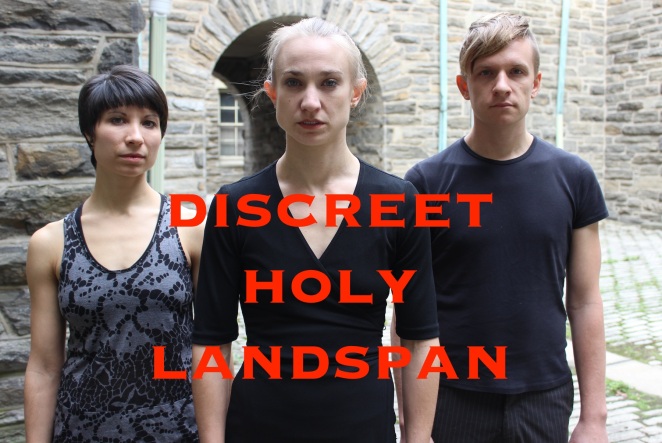 All works are between 10 and 20 minutes. Entire show is 70 minutes.

READ ALL ABOUT DECEMBER’S SHOW IN THE PHILADELPHIA INQUIRER!

SmokeyScout is named after artistic director Josh McIlvain’s cats: Smokey and Scout. The program of the November NICE AND FRESH thanks them, along with Moving Arts of Mount Airy (MAMA), the intimate, neutral space in which the variety show—or “Pop-Up Performance of New Theater and Dance Works”—is being presented.

Each of the four pieces in the November program is about ten minutes, and there’s a five-minute breather in the middle, making your $7 ticket go far while keeping your legs from cramping up.

Emily L. Gibson and Steve Lippe in MAKING the WORLD a BETTER PLACE through MURALS.

McIlvain’s own short play, MAKING THE WORLD A BETTER PLACE THROUGH MURALS, is a titillating denouncement of an unnamed Philadelphia mural-producing program. In it, a veteran mural-maker (played by both Steve Lippe and Emily L. Gibson) goes rogue after losing faith in the belief that a painting of happy multicultural people standing in a garden can improve a neighborhood. The plentiful chuckles in McIlvain’s irreverent script have a guilty tinge to them, reminding us how much stock we place in the massive arts programs of our city.

The other talky-piece is by John Rosenberg of Kensington-based Hella Fresh Productions, who has worked with McIlvain on multiple productions in the past—and whose theater company is similar to SmokeyScout in that both are run by Philly-based playwrights self-producing in areas outside the usual theatergoer’s path. PLOT: SECTION 46 LOT 366-11 GRID O/P-22.5 (whew!) treads the well-worn short-play path of mismatched strangers meeting and swapping philosophical ponderations. Rosenberg’s idiosyncratic voice comes out in the cynical twist: one’s a war widow (Francesca Piccioni) fiercely bitter about not being in TIME Magazine, and the other’s a sad old man (Rosenberg) picking up chicks in Arlington National Cemetery.

The weird highlight of the night is CITY BIRD SINGS THE CAR ALARM, a dance choreographed and performed by Shannon Murphy of idiosynCrazy productions (the company which created Private Places for the 2012 FringeArts Presented Festival). Outrageous, posturing, and irreverent, Murphy’s physical vocabulary borrows from overt seduction, self-conscious grooming, childish acrobatics, and drunken provocation, all within the balletic framework of a bird rising from its nest, singing and dancing, and then returning. The result is an exploration of a sassy, messy femininity larger and more complex than societal expectations. The music, designed by Steve Surgalski, mixes Annie Lenox’s 90s pop hit “Little Bird” with car alarms and other city noises. Murphy effectively mixes vulnerability with truculence. Her persona is much larger than the little space, and manages to intimidate more than a few audience members while telling her story.

“Fresh” is a good word for this pugnacious collection; each short piece manages to make a definitive twist to its respective medium. “Nice,” maybe less so; someone’s bound to be offended eventually, but that’s all part of the fun. The downside is its out-of-the-way location; though it’s only a twenty-minute train ride, audiences balk at leaving familiar pastures. But the radius of the arts is expanding in Philly, and if McIlvain continues to cultivate work of this quality and coolness, he might lure broader audiences out of center city.November 1+2, 2013 (subsequent events December 6 + 7, 2013), smokeyscout.com.

3 thoughts on “Nice and Fresh: DECEMBER!”